Where Did They Go?

As action packed as Friday afternoon was, Saturday afternoon was on the other end of the scale. My friend Mark and I got out to the field about 4:00 and set up across from the sunflowers and underneath the power lines. The loose gravel drive that cuts across the fields and up to the barn was between us and the sunflowers. A really good spot most days. The birds were pretty scarce pretty much the whole afternoon, just not a lot of action. I ended up with six and Mark I think got eight. We're expecting rain Sunday off and on all day. We need the rain more then I need to hunt tomorrow so I'm hoping the rain shows up like forecasted.

Posted by dbannecke at 6:29 AM No comments:

I was able to leave work a couple hours early on Friday and head over to Illinois to get in some shooting on our dove fields. I had the place all to myself so I set up in area between the sunflower field and a pond hoping to be in a good cross flight path. When I walked up to set my decoys around 30 dove took flight that were feeding in the sunflowers. Well, that can't be a bad sign can it?

To make a long story short it was a good afternoon. What I was really excited about is I was shooting really well and got five birds on my first five shots. That doesn't last so I took a quick picture and then continued hunting. Well, my luck continued and I soon was seven for seven. I started to think, hmm maybe I can go ten for ten. I've never done that. Well, then I started getting nervous and let a couple birds pass that were longer shots. I would probably have taken that shot any other time. Another one came through and bang I got him. Eight for eight now. Yikes. I'm sweating but it is kind of humid right? Then suddenly... three dove come darting in over the still standing corn and fly across the sunflowers. Bang! I get one about 15 yards from me and the other two dip and then head across to the other side of the sunflower stand. One barrel left on my sxs, I pick the one heading straight away from me. Bang! I see feathers fly but he keeps going...I think damn that reminds me of those pheasant in South Dakota that just seem to shrug and keep going when you hit them. I keep watching the dove which is about sixty yards away now when suddenly he turns, folds up and drops. Down goes Frazier, down goes Frazier! Ten for ten!

There was a lull after that and it was probably fifteen minutes before I got another shot. I missed on the next two and decided to call it an afternoon. Fun day. I'll probably go again one afternoon this weekend and maybe I'll just bring ten shells with me. Nah, I better bring two boxes of shells like always!


Posted by dbannecke at 5:16 AM No comments:


Labor Day weekend brings the beginning of hunting season and specifically bird season. I had a good opener and second day as well. Hunted Sunday afternoon and got a limit of 15 birds and then again Monday morning and got another 15. Used my 16 gauge sxs both days. 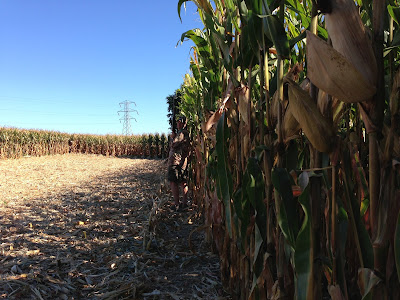 Mark Illig making like a corn stalk. This picture was from this morning. We were in shade the whole morning which was nice. We hunted this spot the previous afternoon with the sun in our face.


Mark making a nice high shot on a passing dove.

Posted by dbannecke at 10:36 AM No comments:

dbannecke
I'm an art director by trade. Working for what would best be called a marketing communication company. I work on integrated programs for a variety of companies. The programs include advertising, events, promotion, retail and whatever else pops into my head to solve the clients needs.